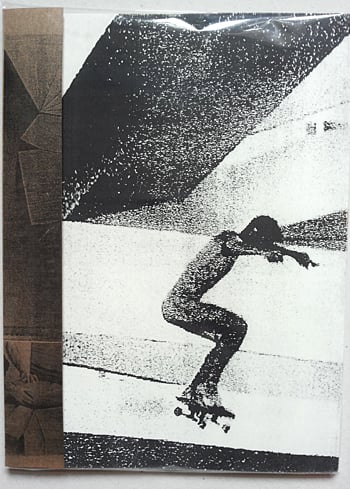 risograph printed carton cover, we make it! berlin
11 DIN A3 offset sheets folted into A4 pages
unopened binding, tacked on one side
edition: 200
coming with a color postcard from the billboard MBU Street Zine
Price: 25,00 + post coast

ISSUE FOUR (MBU STREET ZINE), Sergej Vutuc explores the materiality of the book itself and activates the reader to intervene in the original setting. The unopened, but bound and tacked pages hide additional images on their backside, one can simply rip the sheets to look behind them—and also put them together again in an own order. In doing so, a key moment of Sergej Vutuc’s artistic method is transferred to the reader: working with the photographic material, ripping, kinking, destroying, and discovering what happened to the images during this process.

The book brings together the work of three artists, besides Vutuc’s work there are the self-portraits by Fabiano Rodrigues and images of the installations by Raphael Zarka. They all have in common that they combine their strong connection to art and photography with the skateboard culture.

For the book, Vutuc took their outcomes and composed a choreography of street scenes, repeated again and again in different extracts and angles, underpinned with abstract architectural shapes and images of objects that are connected to both—architecture and skateboarding.

The flow of rough black-and-white images—resulting from Vutuc’s practice of recopying the material—are hold together by the appearance of a human body, which returns as a recurring motif, interacting and sometimes even conglomerating with the architectural shapes and the public space.

RAPHAEL ZARKA, Paris
Raphaël Zarka is one of a new generation of artists for whom existing cultural forms constitute the raw material for their work. The point of departure for his art, which encompasses photography, video and the written essay, is fundamentally sculptural in the expanded field of a twenty-first century artist. For many years a skateboarder and the author of several books on its history, Zarka’s idea of skateboarding, as a kind of re-writing of spaces destined for a particular use, rhymes with his approach to his artistic practice. Similar to the abandoned structures built for past moments of aspiration and endeavor, and the recurrence of forms put to new uses, Zarka’s reflections on skateboarding signal ecology of art making of critical and contemporary relevance. For him it’s not a question of an absolute reality but rather, what it is, has been or might be depending on the position from which you view it.
Extract from Raphael Zarka Geometry Improved, a text by Suzanne Cotter
http://michelrein.com/en/artistes/oeuvres/32/Raphaël%20Zarka

SERGEJ VUTUC, Berlin
The work of Sergej Vutuc is about observing the development of the modern society; a privatization of the public space and conquering the nature with concrete, on one side, and the natural human urge to expand one’s consciousness, to be in between, to exist playfully and live through imagination, on the other side. Skateboard culture is just one of many contemporary social subcultures whose philosophy is based on the aspiration for playfulness and urge to use the open space in the context of freedom of expression. Sergej researches this phenomenon and participates in it through his position of the modern nomad, whose radius of movement includes specific places such as Fukushima, Detroit, Israel and Palestine, strong symbols of on going human mistakes and wrong directions in social and economic development. Through his work, he grasps a surreal feeling of a new or parallel existence, and, even though it can sound utopian, moments of the shift of perception in the human and the society in general.
Dunja Jankovic, Skver
www.sergejvutuc.com