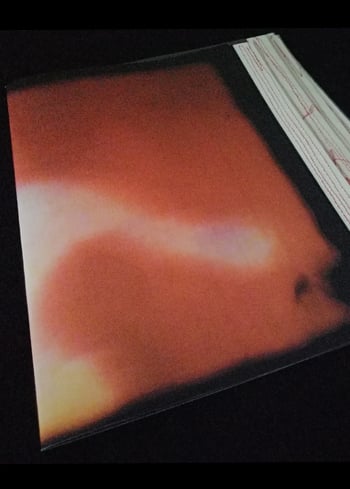 AN OCEAN THE TANGIBLE OF AND ALSO OF THE SELF, Sergej Vutuc

Shapes of foreign human lifeforms imprinting themselves mid-daily evolution onto a subject's retina, spreading their physical reality by the means of infectious marks, is a common phenomenon successive occurrences of which sets a considerable part of the cadence of our lives. It calls for the interrogation of the boundaries of the tangible and also of the self, triggers survival instinct, and emphasizes on the cruciality of direct communication.

« THE BODY, PAINTING I SEEN THERE » mischievously replaces the retina with super 8mm film for an instant where it froze bodily representations in time. The information of skateboarders interacting with and within an otherwise live environment is now framed on medium that is uncertain after subsequent physical alterations, from repeated recapturing as well as gestation in negative form limbo coloring the images of their own historical hue, and now translated onto paper.

The disconnection from a firmly established context conveys the point that all stories are mere happenings out of an infinity of possibilities, all reports excerpts from an ocean of examples and that, as temptingly reliable as perishable traces may seem, counts can insist on retelling themselves for as long as one's book remains open to suggestion.